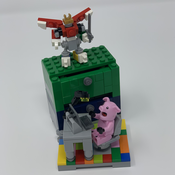 By The_Piggles
50 comments
Description:
This fortress has warded off many enemies over the years, from large armies of enemy soldiers to small groups of thieves and bandits, as well as the various creatures that dwell within the forest, using their strong, sturdy walls and advanced catapults.  But now, a new threat appears on the horizon: a menacing dragon is headed straight for the castle!  Will the soldiers of this fortress be able to fend off the beast using their tactics?  Or will the dragon destroy the fortress that they have worked so long and hard to protect?  It''s up to you to choose the fate of this epic battle!
This is my first product idea, The Mini Fortress!  I was inspired by the many castle sets that I saw on Lego Ideas, so I decided to build my own version of one, using a smaller scale instead of the usual minifig scale to make it more unique.
Here are the features of this project:
- Four watchtowers stationed at each of the four corners of the fortress, enabling the soldiers to see enemies approaching from all sides.
- There is a moat stationed at the front of the castle, with three drawbridges that can open up, preventing the enemies on ground from trespassing!
- Two long-range catapults that can attack from a distance.
- A couple of houses and a stable inside.  The stable roof can open up.
- A fire-breathing dragon!  There are also some flames that you can place in several places to simulate the fortress in flames from the dragon's attacks.