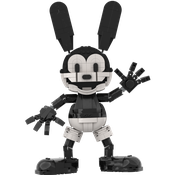 By Oswald The Lucky Human
99 comments

About Oswald The Lucky Rabbit
In 1927, before the creation of Mickey Mouse, Walt Disney worked for Universal Studios. After finishing up his Alice in Wonderland series, in which a live-action girl by the name of Alice went on adventures in a cartoon world, Walt started to work on a new cartoon series. It was a cartoon series staring a rabbit, named Oswald. After the first season, Walt asked his boss for a bigger budget to make better Oswald cartoons. Walt's boss fired him as a response. Then, Walt created Mickey Mouse, and in his overwhelming overnight success, Oswald was promptly forgotten...
In 2006, CEO of Disney Bob Iger traded sports broadcaster Al Michaels to Universal for the rights to Disney's Oswald The Lucky Rabbit, for the video game series Epic Mickey.
Since then, Oswald has appeared in merchandise, video games, has a character meet-and-greet in Disney's California Adventure, and has had various cameo appearances in both short and feature-length films. There are also rumors of him getting a new line of short films on Disney+!
About The Build
This Lego statue of Oswald The Lucky Rabbit is roughly in the same scale as the Mickey and Minnie Mouse set in Lego's 18+ line. It is about a little under a foot high and has 621 pieces. He has posable feet, knees, hands, fingers, and of course, ears. I tried to make this set as authentic as possible by focusing on the small details that set him apart from his younger brother, Mickey.
Apart from his ears, (which aren't really a 'small detail') Oswald's head is more rounded, and his grin is much bigger, going all the way to the corners of his cheeks. His nose is not exactly pear-shaped like Mickey's, rather, it is shaped like a slightly flattened circle. His body is also more stocky than his little brother, with shorter legs and thicker limbs. He does not wear shoes or gloves, although his feet do look very similar to Mickey's shoes in size. His body and head are two circles connected by a rectangle, achieving a peanut-like shape. He looked like this in the 1927 Oswald cartoons for ease of animation. Overall, Oswald is unique to Mickey in many ways, and those are all faithfully recreated here.
Why I Chose To Build This Model
I am a huge Oswald fan, (I've once drove three hours to Disney Springs just to buy an Oswald button-up shirt, got the last one in stock) and love building with Legos. A Lego model of Oswald was an inevitable thing waiting to happen. In 2018, I attempted to build a Lego Oswald. He was about s six inches tall. However, with most of my Lego pieces being a decade old or older, (I have newer Lego sets but I never take them apart) I didn't have a lot of curved pieces, and so the model was kind of blocky and rather angular.
In 2019 I posted the six-inch Oswald on Lego Ideas. It got 48 supporters, (If you are one of them thank you!) and ran out of time. In an update to that posting, I used Bricklink Stud.io to make renders of the model, since the lighting in my house is not that good for pictures. After making that, I set out to make another, more rounded model of Oswald, but had various problems with the size and scale of the model. After lots of failed models, I decided to take a short break from trying to build  Oswald.
In 2020, Lego released their Mickey and Minnie Mouse 18+ set. The scale of that set was perfect. Inspiration struck, an I immediately started work on building a Lego model of Oswald in that scale on Bricklink stud.io. After a few months of hard work and various drafts, (I think this is the sixth one) I finally am satisfied with it.
If you like this model, and want to help make my dream come true, please support, and share this with those you know! If Mickey got a Lego set based off of him, Oswald deserves one too, as without him Mickey wouldn't exist!

By Oswald The Lucky Human
99 comments