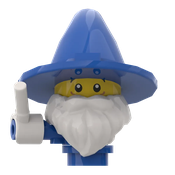 The Modular Castle Kingdom includes rounded features, colourful castles, and ‘big head mode’ child characters to create a happy and fun aesthetic. I took inspiration from some iconic factions and sets, and aimed to reflect the youthful joy that the castle theme has inspired in so many kids and adults alike.
With 15 modular sections, there is plenty to explore, and many layout options for display and play. You could arrange them into a cosy kingdom, line the sections in a row, separate them into groups, or display the sections individually.
The kingdom includes: four 16x16 sections; five 8x16 sections; and six 8x8 sections.

The Yellow Castle: This was influenced by the classic yellow castle (set 375). There’s a throne for the king or queen, clips to hold swords, and a chrome helmet seen from the back.
Majisto’s Dragon Keep: Majisto and the Dragon Knights protect a dragon egg in their tower, waiting to train the dragon when it hatches. The tower features unusual angles set against rounded rocks. The trees represent a drier climate than the rest of the kingdom. Watch out for the spider next to the stairs!
Bat Lord’s Castle: There are no stairs to reach this castle. Instead, Bat Lord travels using his flying machine (an interpretation of set 2539). The flying machine uses the only minifigure torso in this set! Under the platform is a cave-like opening with an upside-down bat. There's also another spider on the ground.
Wolfpack Water Fort: Inspired by set 6075, the Wolfpack renegades return to their fort on the water, after scouting nearby castles. The ramp can be raised, and the fort is built on a rounded subassembly so it can be rotated to the position you prefer. The water is surrounded by reeds and rocks, with a couple of yellow frogs.

Forest Hideout: This is inspired by the original hideout and recent remake (set 6054 and 40567). An archer is partly camouflaged by the green canopy. Another searches the ground for a troublesome snake. I used a teapot for the body and an accessory to give the figure a spear-throwing appearance. The hideout includes a spare bow, a quiver of arrows, and a micro treasure chest.
Witch’s House: I included this for a bit of colour and fun, and to inspire some story telling. Maybe after appearing in some crazy sets (like the Witch's Windship), the witch settled down in a quiet home.
Dragon skeleton: A great green dragon was defeated long ago. Among the dragon's skeleton is a golden ring, a sword, and a minifigure skull. Did these belong to the knight who defeated the dragon?
Skeleton tomb: An old tomb is crumbling, overgrown with vegetation. Inside is a skeleton, wearing a nice-looking helmet. Wolfpack is thinking of stealing it, but this might be an undead skeleton soldier waiting to escape!
Bridge over water: The bridge is intended to connect to the other footpath sections, but as seen in the third image it could be separated out.

Falcon Fortress: The Falcon Knight stands proudly in front of a falcon statue. The axe can be switched out for a sword or spear, stored behind a secret door at the back of the structure.
Ruins with secret treasure: Is this a shrine? More importantly, why is there treasure hidden underneath? Is the treasure undiscovered, or is one of the factions stockpiling their riches?
Rock with a snake: A rounded rock with a tree growing out of the top, and home to a territorial snake!
3x footpaths: The footpaths connect together, and can incorporate the bridge. They could also be kept separate.