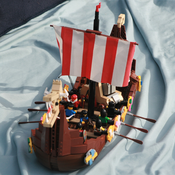 I'm here to tell you about my Lego Jeep Cherokee XJ build.  I hope that you will support this iconic American SUV!  I started working on it in June of 2016, and have made changes and additions since then.

A little bit about this vehicle; the XJ Jeep Cherokee was released in 1984.  The specific year I have based my model off of is a 2-door, 2000 model, with an automatic transmission, and straight-six cylinder engine.  Both of the doors, the hood, and the rear hatch are hinged, allowing them to open for more involvement form the Lego builder.  The front axle pivots, allowing the front wheels to turn as well.  This is a feature rarely observed in a Lego vehicle.  It has front and rear windshield wipers, which rotate back and forth.  There is a spare tire cover in the rear, where it would be located in a XJ Cherokee.  I have included a trailer hitch and ball in this model as well.  It has an exhaust pipe and detailed engine too.  Other details include adjustable seats, moving tilt-able steering wheel, dash laid out precisely as in a real XJ Cherokee, moving gear selector, rear license plate, roof rails, antenna, gas and brake pedals, and adjustable mirrors.

Over 2.1 million XJ Cherokees were sold over the course of this great Jeep's life.  It was sold in two and four-door configurations.  In 1987, one of the best engines ever was introduced; the strait-six 4.0L engine.  It put out 177hp, and was the larger engine option.  Later, this horsepower was increased to 190hp.  This is the engine I have tried to accurately portray in the model.  My family owns a 2000 Jeep Cherokee, also an automatic, with the same engine.  This amazing vehicle after such a long career was discontinued in 2001.  I hope you have enjoyed exploring my creation, and will follow with support!  Thank you!