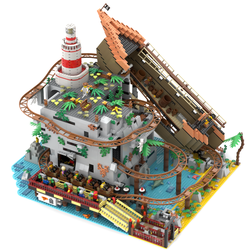 Metalcoaster
98
456
days left
Welcome to prehistoric times filled with dinosaurs.
The route begins with a passage in a destroyed forest, then arrives the first lift which will pass the passengers under a pterodactyle then right for the first course which passes next to ancient trees, dinosaurs, a passage in a trunk and then near a new active volcano. Then comes the second lift, at the first descent pay attention to the T-rex and more...
This roller coaster consists of 2 trains and two lift. Works with a battery case and an M motor.
I wanted to carry out a project with an attraction with two lifts side by side and which allow two trains to run at the same time on the route.
I hope you enjoy this dinosaur themed creation.
This set is 2350pcs
98
456
days left