By Xendor
8 comments
Credit for the main image goes to WipeoutZone. Good job.

For many years, legends of the great Leviathan have arisen. Many theories have been developed as to what the Leviathan was, like a giant whale to an unknown undersea dinosaur. I decided to reference the leviathan from the Bible. I will make no religious discussion, just the leviathan. Instead, I will take the versus, and determine the most logical way the creature could exist in the scientific world. 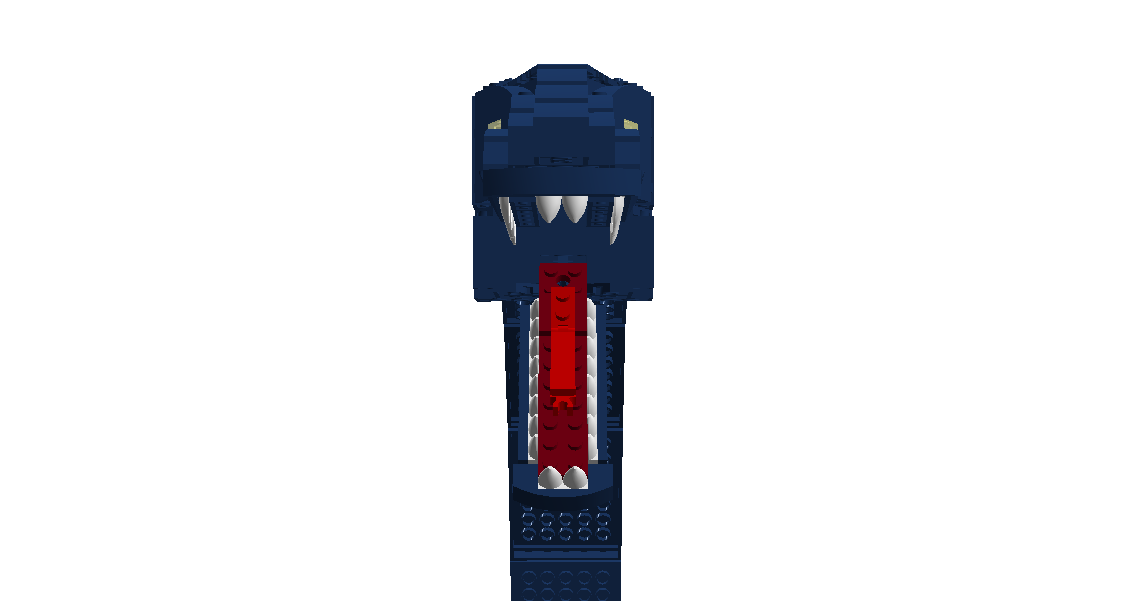 In the Bible, specifically Job 41, we are told of the strengths of the leviathan. Allow me to quote the most descriptive versus from the ESV (English Standard Version).

2 - Can you put a rope in his nose or pierce his jaw with a hook?
7 - Can you fill his skin with harpoons or his head with fishing spears?
8 - Lay your hands on him; remember the battle---you will not do it again!
13 - Who can strip off his outer garment? Who would come near him with a bridle?
14 - Who can open the doors of his face? Around his teeth is terror.
15 - His back is made of rows of shields, shut up closely as with a seal.
18 - His sneezings flash forth light, and his eyes are like the eyelids of the dawn.
19 - Out of his mouth go flaming torches; sparks of fire leap forth.
22 - In his neck abides strength, and terror dances before him.
27 - He counts iron as straw, and bronze as rotten wood.
30 - His underparts are like sharp potsherds, he spreads himself like a threshing sledge on the mire.
31 - He makes the deep boil like a pot; he makes the sea like a pot of ointment.
32 - Behind him he leaves a shining wake; one would think the deep to be white-haired.
34 - He sees everything that is high; he is king over al the sons of pride. 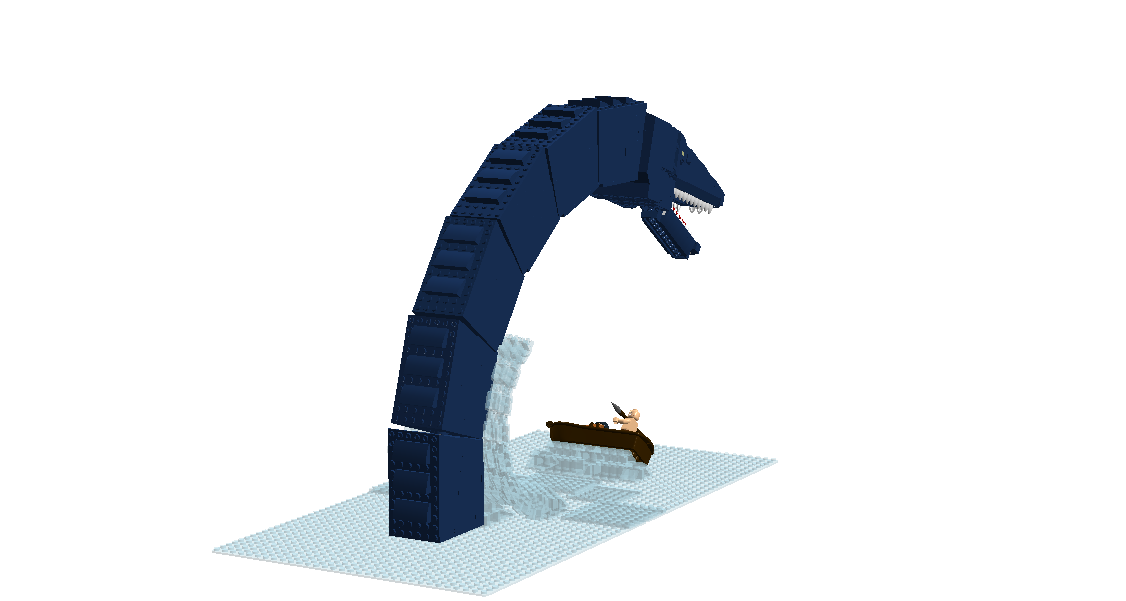 Based off of these versus, I concluded that the Leviathan was a kind of scaled sea monster or dinosaur, like the Elasmosaurus or Lock Ness monster. The Leviathan could've used one of two different methods of fire breathing. One method could be that, like the Bombardier Beetle, it used a chemical reaction to spout liquid with a high temperature. Another method could've been a chemical reaction to develop a flammable gas over time, then when danger's around exhale it, and grind teeth together like flint and steel to ignite the gas. Either way, whoever comes in contact with this creature is begging for a scourch. 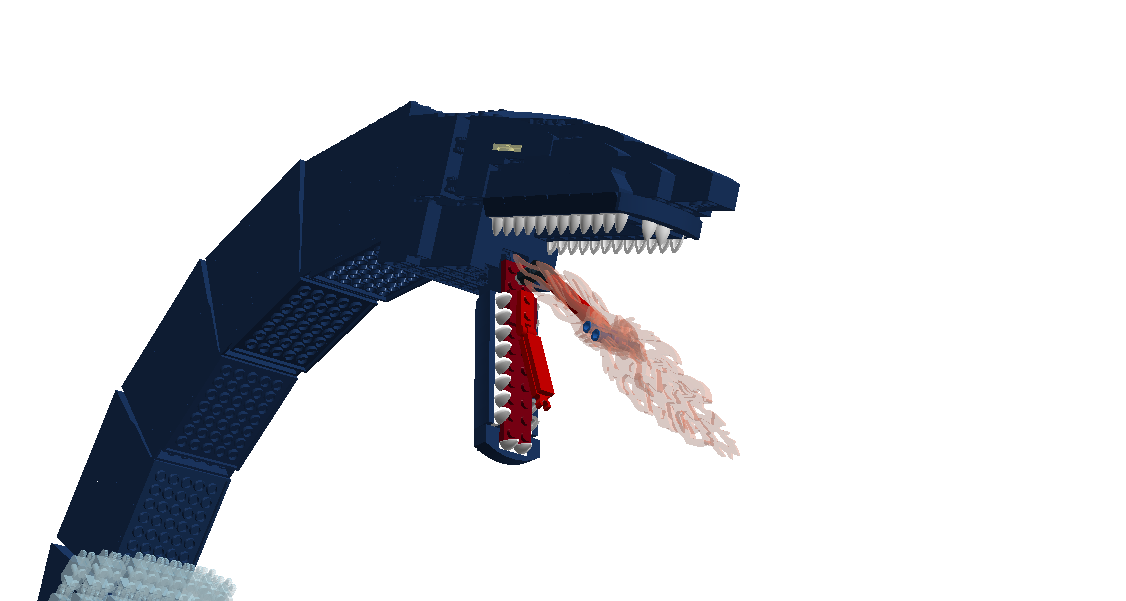 Like my UCS Dragon, this creature has an attachable fire that can be placed in its mouth. But, also like the Dragon, the Leviathan is not entirely adjustable. 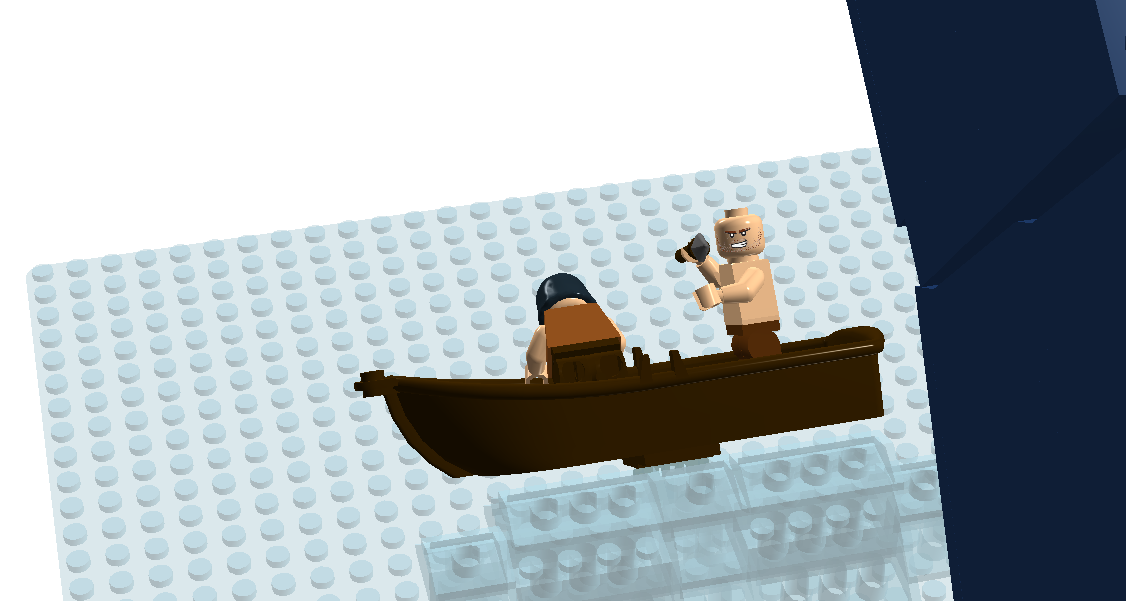 Here are two unfortunate fishermen who ran into the Leviathan.

If you have any problems with my Biblical reference, please don't flag this page. Just place a comment, and I'll see what I can do.

Besides that, this is the second of my legendary monsters UCS series that I'm creating. Next is a UCS Troll.