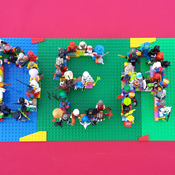 By ILOVEBRIX
34 comments
Hello, I would like to show you my LEGO build, The LEGO Arthropod space explorer. I built this spacecraft so that one day, I will be able to help the Zotaxians return to their home planet. Over 20 years ago parts of our lovely galaxy were taken over by large destructive insects. Also, around the same time the Zotaxians had to flee their home planet of Holox. During the exile, the Zotaxians crashed and landed on a planet, the planet was largely populated by those hostile insects. They had to fool the angry insects into believing they were of a similar breed, which didn't really work. Now over 20 years have passed, and I hear that those hostile insects are extinct. So now it is time for me to do some exploration and assess what damage has been caused by those creatures. I need to find out if the Queen of the Zotaxians, Gypsy Moth is still alive, and help her and her followers return to Holox. I will then try to restore what I can of our galaxy. I have built the Arthropod spacecraft out of broken Insectoid vehicles and several other pieces. I think my Arthropod space explorer would go well in continuing the Insectoid LEGO theme. Who knows maybe those insects have mutated into another form of life, and are still out there. I will let you know.