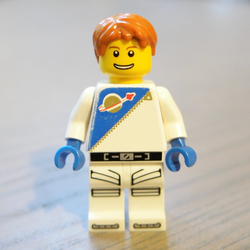 Roam through space and go down the memory lane with a twist.

The Space Explorer packs Classic Space play features and more into a brand new slick and seamless design and would appeal to adult and young fans altogether.

The idea behind designing this set was to build a feature-packed spaceship that would remind the Classic Space and Futuron era but with a brand new style. A set young and adult fans would not only enjoy building but would also play with and be surprised by all the details it includes.

The spacecraft can transform into a base and a separate smaller ship. The base holds a white buggy with a detachable scooter, and a white cargo container. The smaller ship holds a familiar-looking white rover.

The center part of the spacecraft makes the base, it includes a full-featured lab with a sliding door. The living space has a kitchen and two sleeping beds.