Pillar of the Deltaworks 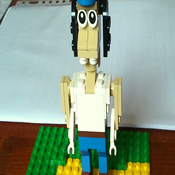 For centuries The Ntherlands has suffered a lot rom floods. After the infamous flood of 1953 that killed nearly 2000 people and flooded more then 150.000 hectares of land, plans were made for a series of dams to protect the southwestern part of the country from the water. these plans were called the Deltaworks.

The most impressive and costle project was the Eastern Schelde Dam. Originally it was designed to close off the Eastern Schelde rivermouth turning it into a fresh water basin. Due to unexpected protests from environmentalists the dam was redesigned as an open dam with a number of sluices to maintain the saltwater environment. The sluices would only be closed during heavy storms and high water levels.

To celebrate it's 30th anniversary i decided to recreate one of the pillars used to build the dam. For the storm barrier 65 of these pillars or piers were constructed, among which 62 steel slides would be installed.

For the recreation of a pillar i used 275 elements. I had the idea to recreate a full section of the barrier to show how the slides would work. Perhaps i can do this in a future update of this project.

If you like Architecture and Mega construction projects then this pillar would look great as a decorational piece.

Thank you in advance for supporting my project.