Escape From the Leviathan 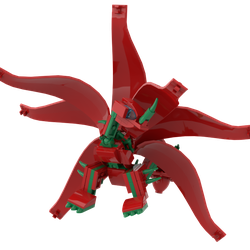 The Leviathan is an evil sea serpent/dragon known for attacking and sinking ships.  According to legend, the people on the ship would only see a massive shadow under the ship before being attacked.  In some legends, the Leviathan is compaired to the Kraken (another sea monster said to look like a giant squid or octopus) while in other legends the two sea monsters are one in the same.  I built this set off of the legends that have the two creatures being one in the same.

This set has multiple joints for multiple poses.  Since I combined the Leviathan (sea serpent/dragon) and Kraken (monster squid/octopus), I gave the Leviathan four tentacles that it can use to grab things.  The four gaint wings on its sides can be used to temporarily fly through the air, otherwise they are large fins used to swim through the water.  This set also features a ship for the Leviathan to go after.  You can choose if the ship manages to escape from the Leviathan or if the Leviathan manages to sink the ship.

I built this set after watching a moive featuring a sea monster.  I knew there were legends with sea dragons attacking ships and with my love of dragons, this set quickly formed within my mind.  I also think people will have fun setting up different stories of whether or not the ship manages to escape or if it gets caught.