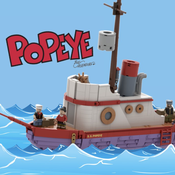 "He is wot he is and that's all that he is, he's Popeye the sailor man!"
Popeye was a great cartoon that found its way into many of our homes when we were younger and was a huge influence in the early animation industry. I thought Popeye would translate wonderfully into LEGO so I had my go at it. I think this would make a great set as it would compliment both the sets based on cartoons and also any of the nautical ones as well. So if you are one tough Gazookus who wants to see this become a real LEGO set, vote for this set so we can make this possible!
Join Popeye as he travels the seas on his trusty S. S. Popeye tugboat with the beautiful Mrs. Olive and shipmate/troublemaker, Bluto in hopes to find adventure surely filled with a healthy spinach snack!
This set contains 859 pieces and 3 minifigures: Popeye, Olive Oyl, and Bluto. This set includes a removable top section for access to the cabin area which holds two beds, a kitchen, boiler, and of course plenty of cans of spinach! Make sure to scrub the deck clean and keep track of the cargo on board and watch out for Bluto's devious plans to make a fool of Popeye and steal Olive's heart. Spend your time at sea relaxing with some deep sea fishing using the poles at the back of the boat. Help Popeye at the ship's wheel to prevent yourselves from heading off course!
The design of the boat came from the episode titled: "The Great Speckled Whale" which I definitely recommend you all go and watch!
Thank you for all of your support and I am looking forward to hopefully reaching the 10,000 supporter mark! in the meantime, "keep good behavior, it's your one life-saver with Popeye the sailor man!"