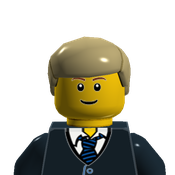 History:
The Lego Group began when Ole Kirk Christianson (1891-1958) started making wooden toys in 1932.
He called his company the Danish phrase "Lego", which means "play well". In 1947, Lego  bought a plastic injection-molding machine, and they began making plastic toys. By 1949, Lego was using this machine to create over 200 kinds of toys. Then Lego received a sample of interlocking bricks produced by Kiddicraft, then Lego began making interlocking bricks different from the ones they make today, inspired by Kiddicraft's plastic bricks. The bricks, made from cellulose acetate, were a more advanced form of wooden blocks. By 1951 half of the company's income was from plastic toys. By 1954, Christianson's son, Godtfred became the junior managing director of the Lego group. In 1957, the Lego brick we use today was invented, but this time using ABS polymer instead of cellulose acetate, which greatly improved the durability of the connection between the bricks. And in 1958, it was patented. Also in 1958, Ole kirk Christianson passed away, and Godtfred became head of the Lego company.