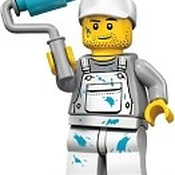 The post credit - Shawarma joint scene of the Avengers movie is an iconic one.

The Scene comprises the 6 Avengers heroes - Steve Rogers, Tony Stark, Natasha Romanoff, Bruce Banner, Thor and Clint Barton eating Shawarma at a nearby joint after the Battle of New York.

And so I thought that it would be awesome if Lego would also do a re-enactment of the scene - diorama style (and would probably be the first set that would feature all 6 heroes in one set - though bruce banner is not in the "green bigfig mode").

Updates is yet to come, will try to dressing them in their real Avengers Outfit.