By Xendor
4 comments
Once again, the Toa Hagah are coming. And this time, Toa Kualus takes the lead.

After Norik and Iruni lost their life energy, Kualus took over. He lead the team through many trials in an attempt to bring the Toa and Glatorian together, while protecting the villagers as well. But after it seemed that they reached peace, he left his warrior ways to become a map writer. He travels far into the deserts, forests and mountains, documenting every significant landmark, along with a Toa of air to document the skies. His skills of climbing, and his icy powers allow him to survive many conditions. But one of his greatest feats was the Hau Cliffs, where he carved the Hau from a glacier. Over thirty yards tall, it is a symbol of the villagers who maintain the art. But during his travels he discovered a clue about what happened to the Great Beings, where they went. In response, Tahu has gone out in search to find what the clue means. The riddle goes thus:

"Ice by the stars, wind from the sun,
Is where we must depart.
For war has choked the warriors lung
And called for a new start.

Ten thousand stars of red will glow
When to return we are called.
Till titan's gift of life doth blow
Bara Magna's skies are walled."

Though part of this has made sense, there is one more part that needs to be fulfilled: the ten thousand stars of red.

Though filled with respect for his fellow Toa and the Glatorian, Kualus prefers the company of flying Rahi. Using his Mask of Rahi Control to call out to his friends, he then takes his spear head and blows into it. As he blows, the breeze enters the holes on the side of the head, channels his emotions, and vibrates the disc at the back of the blade. When at peace, this can create beautiful, soothing music that brings all Rahi to peace as they surround him. He has even learned the language of some flying Rahi, and can sing in their language into the holes, creating even more beautiful music. 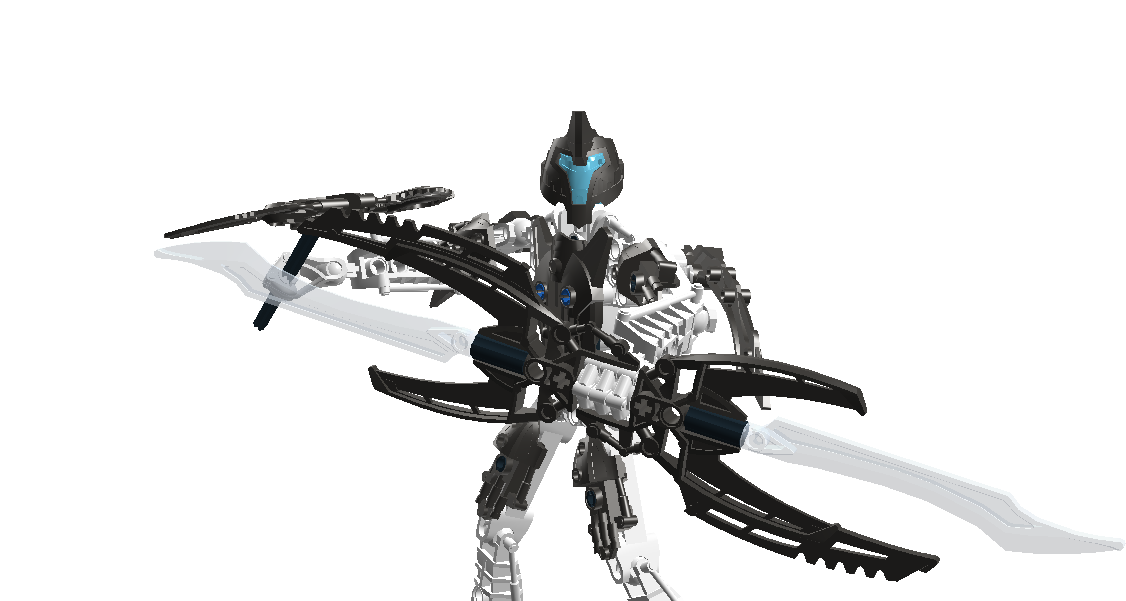 Speaking with some of the migrating flying Rahi, Kualus has been able to discover a little bit of what is going on. Another figure was has joined the Unknown, while they seem to have revived what seems to be all of the Vahki. But why they stay in place he has no idea. 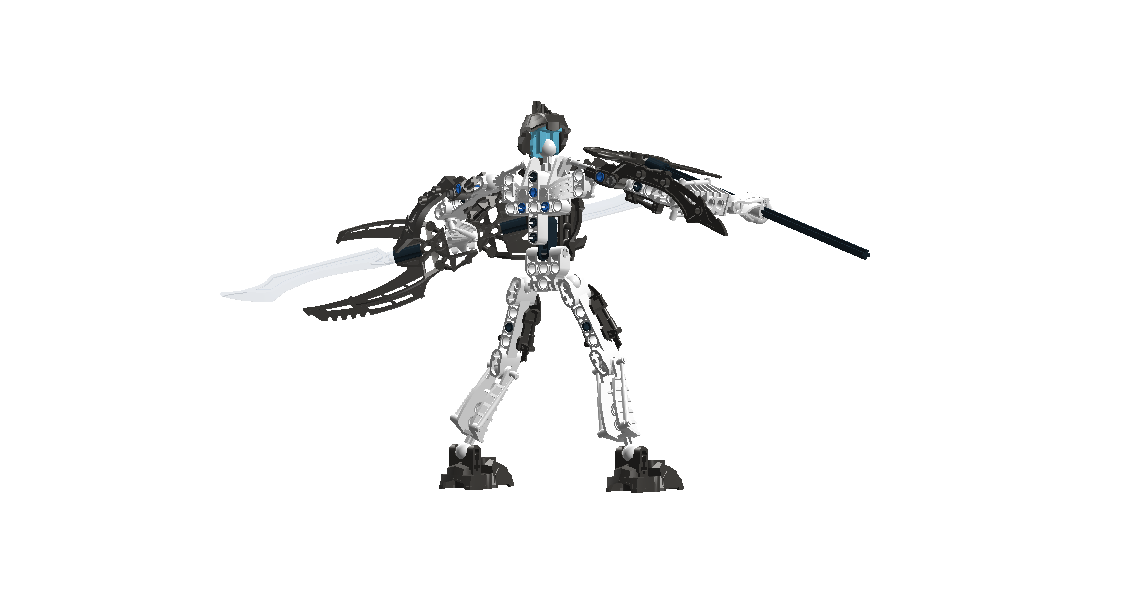 Though he is known as a member of the council, he rarely participates. He relies on a little bird from the dessert Bara Magna to relay information to him. But he comes when the times are most important.

Now for Chapter 12 of Bionicle: The Return.

Bionicle: The Return – Chapter 12: Enemy on the move

Jonn: Guanka, think you could provide us with water?

Guanka: I’m afraid I will only be able to provide water a few more times. I’m beginning to feel thirsty myself.

The Toa of the Golden Armor have been travelling for some time, now. They are now in the only desert on Spherus Magna, at five hundred miles long, two hundred miles wide.

Bolder: But you’re a Toa of Water. Can’t you create water?

Guanka: Because of the lack in plant life, there isn’t enough oxygen.

Clarrik: I told you, we should’ve gone around.

Jonn: I know what you said. But if you would make your reasons a little clearer, than maybe we would’ve listened to you.

Tayr: Well, I have one good reason.

Jonn: And what’s that?

Tayr: What time is it?

Shycle looked up at the sun, which was to their back.

Shycle: I’d say about nine in the morning.

Tayr: Really? Why do you think that?

Jonn: Just get to the point!

Tayr: My point is, we’re going backwards. It’s actually about five in the afternoon. I know, because the sun passed right over our heads a while ago.

The Rahkshi of Voices walked into Teridax’s chambers.

Voyeyahk: Sir, the Vahki have detected a large mass moving towards us.

Teridax got up out of his throne and began exiting the room.

Teridax: About time! What has that idiot been up too?

Akingi: I think you’ll be intrigued.

They began following the Voyeyahk out of the ruins. On their way, the Unknown walked out of a connecting hall and joins them.

Unknown: Akingi woke me up from a dream. He tells me that Tyrant has returned.

Teridax: He speaks the truth.

Teridax notices that the Unknown looked a bit shaken.

Akingi (telepathically to Teridax): I suggest you leave it. She’s on the edge of a break down.

Akingi: You have no idea.

The Unknown stared at the floor, thinking of the dream she had. All around her was ruin. The canister that contained her was shattered, and the remains of a laboratory surrounded her.

Tyrant was sitting on a throne, carried by four Skrall, one at each corner. As he looked on, he looked at his right hand man, Branar, walked ahead of him.

Branar: I’m still impressed at how fast you beat me. You sure you didn’t use your powers?

Tyraht: I promise. If I had, I wouldn’t have been able to stand.

Skrall (the one holding the left front): Sir, may we switch?

Tyrant: Actually, I think it’s time I got off.

The Skrall placed the chair down, and Tyrant stepped off. He then beckoned to a water bearer that was nearby.

Tyrant: Hey, you! Get these four some water!

Tyrant: Because they are. They’re mine to command before you. But be wary, for my masters aren’t as generous.

After a few more minutes, Tyrant and the Skrall stepped over the final hill to see the ruins, with two tall figures standing at the entrance. When he reached them, he and all of his followers kneeled before them.

Tyrant: I have done as you requested.

Teridax: You sure took your time.

Tyrant: We wanted to show you how strong they are.

Teridax: Five Nui-Jaga is all you got?

Tyrant: Oh, no. These are only a portion of those we’ve caught. The rest are being held in cages at the rear of the army.

Unknown: So many. To what purpose do these… Nui-Jaga hold, Teridax?

Teridax: These creatures were created by the Makuta so that they might… protect the Matoran. Of course, I had other plans for them. Though alone they don’t pose much of a threat, an army increases the threat level greatly.

Tahu: That cutie happens to be a wild Burnak, a dog-like Rahi that attacks only when provoked.

Berix: I wasn’t provoking it.

Tahu: That’s obviously not what it thought. Remember, even though you have become a Glatorian, you can’t do everything. Take everything with more caution.

Tahu: That’s what happens when you’re a team for so long.

Tahu and Berix got back up. Twenty years ago, Berix had finally been given the option to become a Glatorian. Vakama touched Berix’s right hand on the Ignika, and Berix transformed. However, he looked exactly like the Glatorian Leader Ackar. People began whispering about him, asking why he had to look exactly like Ackar. What does it mean? Some even teased that Berix could be Ackar’s spiritual son, despite their elemental opposites. Probably the only things that separated them was their color, their character, and their elemental weapons.

Tahu and Berix looked up to see a few of the New Guardians.

Tahu: We’re fine, Alizuo. Think you could send us a rope?

The female Toa of Air lifted her hands. Suddenly, Tahu and Berix were lifted up into the air by a gust of wind. But when they leveled with the cliff’s ledge, the wind stopped. Fortunately, Thesto Toa of Earth was there to place two convenient platforms underneath them.

Thesto: I told you, you need more practice before you do that.

Alizuo: Oh, come on, honey, can’t you soften your heart for me?

Tahu: Less flattering, more travelling. It’s enough that Berix almost got severely hurt. We need to get to the council.

Alizuo: But what does this coin have to do with the riddle?

Tahu: It reads of the ten thousand stars. That’s all it says on the face. But on the other side we’ve got these strange markings. We need to find out what it means.

Thesto: Then let’s go. We need more distance till sun down.

Tahu: We’ll be reaching the dessert soon. Once we do, we’ll need to travel at night to keep humid. Where’s everyone else?

Alizuo: They’re scouting ahead. They should be back soon.

Teridax: Well, what do you think?

Akingi: I think it’s going well. Though I’m still not sure about the Unknown.

Teridax: She could be a serious threat if she turns on us.

Akingi: But I can cut her life source. She can’t beat us.

Teridax: I wouldn’t be too sure about that.

The Unknown was back in her bed. Once again, she was having a dream of another world, a world now torn apart by fire and smoke.

Father (memory): Remember, you will be of much greater size. You will be able to move faster, but it will take some time to get used to. So when you come out, you must first crawl.

Trisa crawled over to where her father was calling. She carefully lifted a wooden platform that covered her father, but when she saw him she saw his heart crystal dying.

Trisa: But there must be something! The lab…

But she looked around. The entire lab was destroyed. Nothing was left of it.

Trisa looked back at her father.

Together: To restore the world to its original beauty.

Then her father’s heart died.

Unknown suddenly woke up and looked at her hands. They were the same.

She stared at them for a long time.

Please, support the set and rate the story. Have a great time, fellow FOLs.