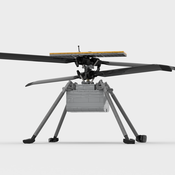 By AnotherWorldSK
55 comments
This is a Lego model of the Ingenuity helicopter that successfully completed it's mission on Mars. The first powered flight on another planet!
The reason I made a Lego model of this, is because I love it. I love the achievement the people have made with Ingenuity. I love the idea of where this space exploration will takes us. It's like the Wright brothers, just 120 years later, and on another planet. Just imagine where we could be in another 120 years! And what kind of things we could be making Lego models of!
I believe this will make a great set for people because of the history around flight, and space flight. And in my humble opinion, because it's awesome!
This model itself has rotors that can be moved into any position you choose. It has shock absorbing brackets on the legs. A detail rotor setup. And a removable side panel, so you can see more on the inside. On the inside, I imagine there being a sticker or two, to mimic the inside, and show more detail like the circuit board and wires.
With the shock absorber brackets on each leg, I have made a trial version of them in real life, and they seam to work just fine. Within the bracket is piece number: 4198367. A rubber flexible piece of Lego used for things like this. The angle on the digital rendering isn't what the real thing bracket is like, as I couldn't figure out how to adjust the angle a tiny amount that it needed. The real model would have the legs at a slightly softer angle, like the real helicopter. Though they're not like car suspension, they do have movement in them that looks and feels like the real thing, so I'm more then happy to go with this design for these brackets.
In regards to the blades used, I did try making blades that fitted the shape of the real thing, but everything I tried just made the rotors look bulky, which I don't think is right, as the blades should be stream lined, not bulky. The blades used are what I could use from the selection available. If there was one thing I'm not 100% happy with it would just be the look of the blades. Regardless, I'm still over the moon with how this model has turned out!!
I hope you like it, and feel free to give your feedback, ask questions, or share this with others.
Thanks for your time in checking this out! Keep building!
SK