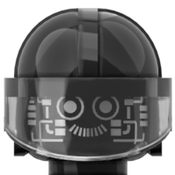 Description: Taking control of a Laser-Bot, deep within “The Board”, you and your friend(s)/family navigate and compete against one another in a game of Lasercross! Where after the first turn, the goal of the game is to summon enough blockades or ”Laser-Blocks” to form a trap and set them around other players whenever it is your turn in order to earn points.  Points are represented by the number on the back of your Laser-Bot and are gained whenever you successfully connect four Laser-Blocks around/trap another player, with whoever is the first one to accumulate the most points wins! Game for 2-4 players.

The Guide & Rules/How to Play:
1.) As mentioned above, the goal is to get the most points than everybody else, with the maximum cap (capacity) being 8 with whoever achieves this or at least has highest number when the game ends win! To keep track of the points there is zero on the back of your Bot at the start of the game at which you replace as earn points. replace each number with the next one as you score.
Example:
0 to 1, 1 to 2, 2 to 3, etc.
2.) It is only after the first turn that you can start setting up your Laser-Blocks to form your trap, that way everybody has a head start and can strategize on where to put their Laser-Blocks on. Laser-Blocks can be placed on any open tile of the board/field with your only limit being on the number/combo you have rolled.
Examples:
-Blank(2x): Do Not move Nor place a Laser-Block
- One dot: Move Once & place One Laser-Block
-Two dots: Move Twice & place Two Laser-Blocks
So on and so forth with the maximum roll being Four, the exact number of blocks needed to form traps as well as the limit of Laser-Blocks that you can have on the field‚ however when you roll again you can move your Laser-Blocks around the field depending on the roll’s number. Once you have formed your trap and captured an opponent, add your point, remove your Laser-Blocks that you used for the trap from the field, and then return them to your hand. Any Opponent that is successfully trapped respawns to their starting point and cannot be trapped again until they can move out again.
3.) Normally you cannot move another player’s Laser-Block(s), however you can still pair up those Laser-Blocks with yours to create traps, decreasing the risk of your opponent getting away and starting over to the need of a Four to complete a trap should roll below it. On the other hand if you do get below a Four but above a One, such as Two, you can “distribute” each of your Laser-Blocks onto other players Laser-Blocks to create more traps, increasing your range as well as chances to score. however by using another player’s Laser-Block(s) they also earn a point should you score. If any player is trapped/in a trap that consists of one of their Laser-Blocks, it does not count for a point and the “trapped” player can move out on their turn, alternatively a player can put their own Laser-Block next to/around themselves to prevent others from scoring.
4.) Despite all the maneuvers a player can take, many of them can be countered by the Rainbow Roll, a “Power-up” that if you get on a dice/roll allows you to switch another player’s Laser-Blocks to any other color. This can be used to either convert an opponent’s Laser-Blocks into yours or assist another player if decide to Truce or play in team. Your only real limitation is that you can only convert up to Four Laser-Blocks/have only said Four on the field and only for One color per roll. If you get the Rainbow on both dice, treat it as a Blank but still change the color as intended above.
Includes:
-2 buildable Lego Dice
-5 Lego Minifigures: 4 regular Laser-Bot and 1 White Laser-Bot for special game-play
-30 Laser-Blocks, 6 for each Laser-Bot/Color in:
>Transparent/Clear (For the White One)
>Transparent Fluorescent Reddish/Neon Orange
>Transparent Bright Green
>Transparent Fluorescent/Medium Blue
>Transparent Fluorescent/Neon Yellow (Color most notably used in 8543 Nokama, 8548 Nui-Jaga, 8533 Gali, 8570 Gali Nuva, and 8596 Takanuva) is NOT Transparent Yellow or Fluorescent/Neon Green!
-Total Pieces of 1234