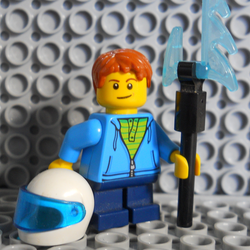 This advanced, interstellar spacecraft is my third "idea". Its sleek design was originally intended for fast-paced combat, although during simulators, the craft was always noticed because of its flashy, blue hull. The designers had already ruled out changing the color to something more stealthy, because it would obviously lose its cool factor.

Eventually, the Zenith Star Navigator became an interplanetary racing vehicle, losing its Lazer turrets. immediately, It won many races and is an accomplished ship, that I am proud to submit to LEGO Ideas. I hope you like my models, and if you do, please support! Thank you.