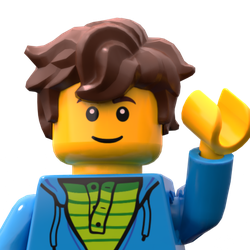 The Asian Dragon is made using 273 pieces. I was originally going to build a medieval dragon, but it slowly became a Chinese dragon as I built.

My favourite part of the build is how the eyes are made… I used a pistol with a flipper on the end! The eyes are the very first thing I built and inspired the rest of the build. The pistol can rotate so you can make different expressions, as shown in image 2.

I used a lot of ball joints, so you can pose the model in many different ways. In image 3 you can see one of my favourite poses.

I think that this would make a fun creator style set. It isn’t hard to build and It’s a cute representation of a classic mythical creature.