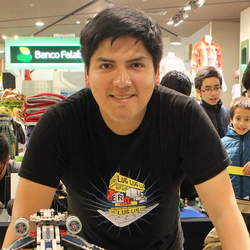 I present you Green-Gray and his brother Desert-Rain.
They goof around a lot during the day, but guard fearlessly the safety of the defenseless bricks that lay at the MOCing tables by night. When the lights are off, their eyes glow in the dark as a warning that keeps the enemies of the pile of bricks away. In the morning your pile of bricks will be there safe and well rested, and even those who you thought were lost forever will re appear as they feel safer now at plain sight.
They are the master builders best companions (sorry brick separator), the friends of all the good hearted minifigures and foes of the evil ones (and also evil bionicle and herofactory figures).

I have always like LEGO mechs and i often build one from time to time.

Encourage by the new balljoint pieces i wanted to build a robot fully articulated and very posseable.

I started working on the green robot while building my regular Castle MOCs.
So it became my companion roBot since then as it is always around my table while i'm building.
I wanted it to be both cute and heavy armored looking so it would be able to look cool in action poses and in funny ones.
I wanted it to be kind of swift and aerodynamic looking while being able to crouch like a ball and fit in my car's cupholder (yes i bring them with me while driving so i can display it in my office desk as well).
I made the green first but then i thought it would be nice to make more in different colours. I made two to fill my two cupholders, one green and a tan and blue one.
I think other AFOLs would enjoy to have this robots as they can be posed around and they make a very cool figure for display around other LEGO figures and even regular action figures.
Also for it's articulated features, kids would enjoy playing with them as well.
I think they can appeal to a wider range of people for their cuteness (i think they look cute enough for an aww!)
Check out more pictures in my Flickr Album: https://flic.kr/s/aHsk7JFtez

Thanks you for supporting and sharing!