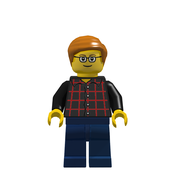 LEGO Space Pirates is a steampunk version of the LEGO Pirates sets.

For this set I decided to make a treasure ship and a little pirate ship.

The treasure ship has 4 cannons and two laser cannons. It also includes two treasure chests with diamonds and gold.
Besides, it has two big engines and four little parts (like arms) with little engines to control the ship.
The main Power gets this steampunk ship from his sails. Because of this every mast has a energy line.
Inside the ship is a room for the governor whose roof can be taken off.