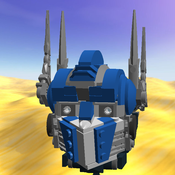 The BMW Z8 is one of my favorite automobiles.  When the Z07 prototype received strong attention and accolades at the 1997 Tokyo Auto Show, BMW knew that they had a hit.  After a few modifications and relabeling it the Z8, the car was soon thereafter put into production and became an instant classic.  BMW stopped making this car back in 2003 after building about 5,700 of them (including the Alpina), so you aren't going to see one very often.

BMW offered only a very limited number of colors for the car.  For the exterior, they produced silver, black, red, and blue, and eventually a darker metallic gray color.  The interior could be ordered in black, red, red-black, tan, or tan-black.  A BMW Individual version was eventually offered with more color choices.

As with most sports cars, the Z8 with its nature-inspired curves poses a considerable challenge to reproduce faithfully in Lego.  I have made an attempt here at 6 studs wide by ~20 studs long and ~5 studs high.  The real vehicle is 72 in. wide, 173.2 in. long, and 51.9 in. high (ref: https://en.wikipedia.org/wiki/BMW_Z8), so mine is a bit narrow (or long, if you prefer), due to limited part options.  I implemented this model in silver (gray) with red interior.  There was no suitable Lego color for the "crema" interior color BMW produced.  Red and black exteriors also look good, but Lego does not produce a suitable shade of blue to match the blue exterior color of the car.

If done as a full-blown model, I would add stickers for the BMW blue-and-white rondel on the hood (bonnet) and trunk (boot), and do the front grille as a sticker with highbeam lamps on the ends, applied to a gray curved piece rather than a black one.

Henrik Fisker deserves a great deal of kudos for designing this beautiful automobile.  I hope this model has done it justice.