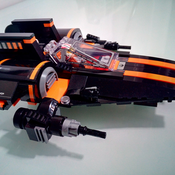 The A-Wing Interceptor is a Starfighter produced by Incom Corporation, the successor to the model RZ-1. It will be used by the resistance in their struggle against the first order about 5 years after the destruction of the Starkiller Base. The A-Wing Interceptor includes new ion engine, identical to The T-70 X-wing starfighter, but more powerful and fast. The fighter has a pilot and an astromech droid with a system of shielding improved on its predecessor, as well as improved hyperdrive.

In the Assembly of this model I have based in part on an already existing on the market (75003 LEGO model). But there are enough differences above all in the back of the cockpit, engines and weapons. Two powerful laser cannons on both sides compared with the existing model give amore fear some aspect given the increase in firepower. I am aware that a new model of A-Wing will soon be on sale (based on Star Wars Rebels) but I didn't want to miss the chance to teach my particular version of the most famous interceptor of the rebel Alliance now used by the Resistance.