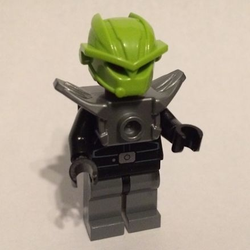 Buck Rogers is an astronaut that gets preserved in suspended animation and finds himself in 500 years in Earth’s future, 2429.  Buck has had several incarnations.  He started as a comic strip in 1929.  It became a radio program in 1932.  In 1939 Buck hit the big screen.  And in 1950 he was on television.  The characters and spaceships shown here are from the 1979 TV movie and 1981 TV series.  In theis set Buck has recently ran into Hawk, another main character in this short run series.

Being the series was from the 1980, I used the classic space designs.  Hawk’s spaceship was probably one of the more interesting designs in SciFI.  Rounding out Buck Rogers and Hawk as minifigures are Twiki and Dr. Theopolis.