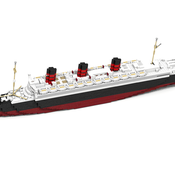 RMS Queen Mary was a transatlantic ocean liner, launched in 1934 on the River Clyde at Clydebank in Scotland after a four-year construction due to The Great Depression.
Owned by the recently formed "Cunard-White Star Line", she was one of the biggest, fastest and most luxurious ship of her time. With her 200 000 hp engines and her 30 knots speed, she held twice the Blue Riband, from 1936 to 1937, and from 1938 to 1952.
Converted as a troopship in the early years of the Second World War, she carried up to 15 000 soldiers at each cross.
After the Second World War, she retook her transatlantic service until 1967.
Today she is serving as a floating hotel and restaurant at Long Beach, in California.