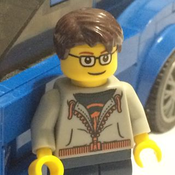 This is my model of the Dragon spacecraft. it has removable solar arrays and nosecone.

The dragon is a cargo spacecraft produced by SpaceX. It is currently the most frequently used spacecraft for resupply missions to the International Space Station, and is also the first and only spacecraft owned by a private company to ever dock with the station.

(For more information on Dragon, head over to SpaceX's website: http://www.spacex.com/dragon)

I built this model because I am heavily inspired by the engineering in modern spacecraft, and building them myself gives me a chance to look more closely at blueprints and find features I may not have known before. This particular model is one of my favourites, and I would love for this to become an official set.

I believe this model would make a great set, as it is among the coolest looking to display, but also gives opportunities for many play features, some of which I didn't even include in my model (like removable cargo). Space travel is one thing that unites scientists and engineers worldwide, and inspires creativity and innovation, ideas which translate very smoothly into LEGO. There have been other sets based on spacecraft in the past (Like the 2003 discovery sets or 10231 Shuttle Expedition), and I feel that this model will be a great addition to that collection.

Remember to support if you want this to become an official set!