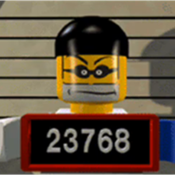 By Lego Maniac 1993
10 comments
Cursed Cove is my interpretation of a vintage Lego Pirate set from the System era. I wanted to construct something fun to look at, build, and had a few play features. I wanted to make sure it was colorful, but not overly loud or messy with its pallet selection. I got inspired by watching Youtubers review some old sets from my childhood. Something I learned from them is that the old Adventure sets are very good at setting stage for a story telling with environment. It's been a long time since I've seen a pirate set sold by Lego, so I figured it was about time they let their younger customers get a taste of buccaneers and adventure.
A bit of setting for the story of the set: Commodore Click has been chasing down the terrible pirate, Captain Crooked and his brick plundering crew. They eventually tracked them to find that they have set up a hide out in an old cove once run by the even nastier (and very wealthy) Captain Rattles. Commodore took two of his best navy-men and has set upon the pirate's base and its shark infested waters. Who will win the fight; Commodore Click or Captain Crooked? And will the last reserve of Captain Rattles ever be found? (Would he let it go with out a fight?)