By Xendor
2 comments
After Teridax was defeated, and Mata Nui passed on, the Dark Hunters began experimenting on willing subjects on fusion. Experiment 207 is one of 25 out of 300 successful trials. 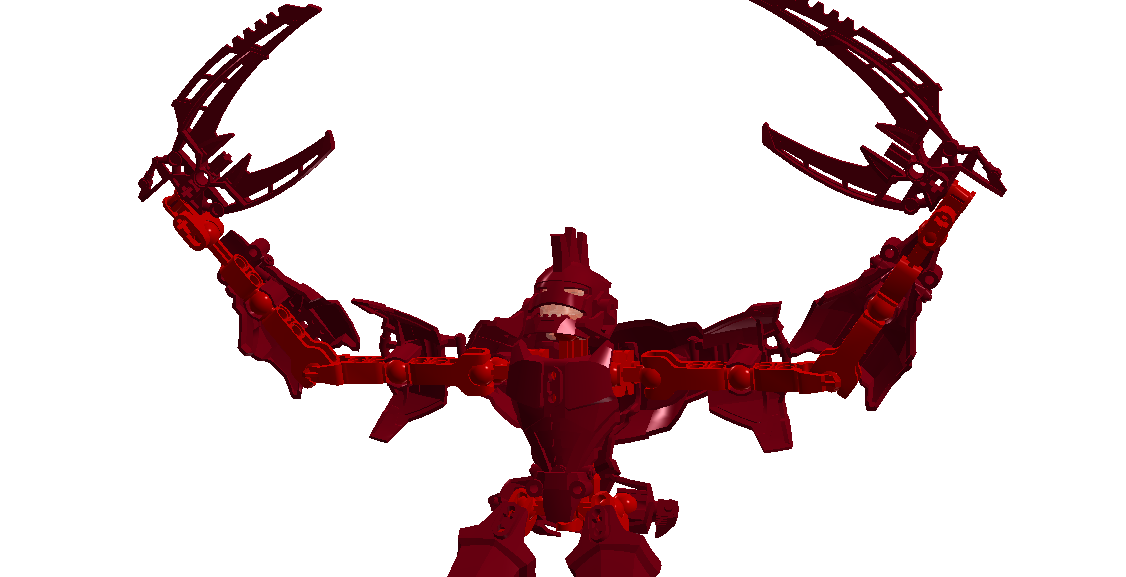 Originally, he was a matoran, found by a team of Dark Hunters on an island near Voya Nui. He was famished, and they helped him to health. Due to a concussion, he had no idea he was a leader of the guard for Voya Nui by the name of Garagob before the Great Earthquake. However, the Dark Hunters recognized him, and convinced him that the people he led had abandoned him.

Once he gained most of his memory, he led an attack against Voya Nui, leading a team of Dark Hunters. Defeating the few Toa there, he then reached the guards and confronted them. When they told him that he had really been washed off shore by a storm, and brought his mother to tell him the truth, he ordered the Dark Hunters to retreat. Knowing that he could no longer stay on Voya Nui, he left with the Dark Hunters. 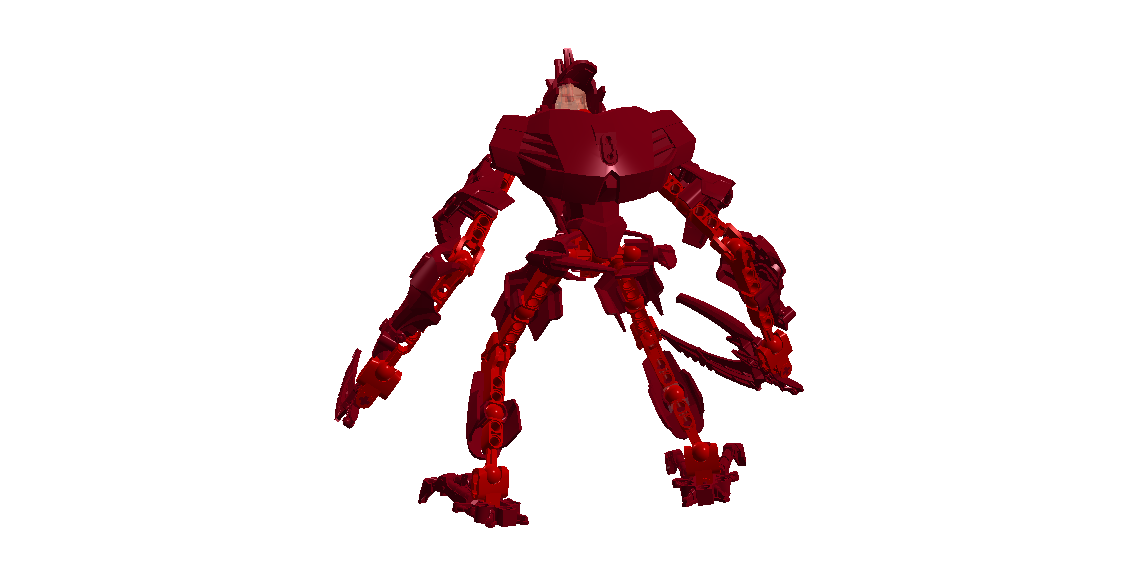 Years later, the Dark Hunters found the remains of a Manas Crab. At this time, they had already done 157 experiments, and had many more scheduled. In the mean time, Garagob was competing with other Dark Hunters who sought the strength of a Manas. In the end, Garagob's brains, sneak, and back-stabbing won him the award. Few years later, he was fused with the remains of the Manas Crab.

Along with the strength of a Manas Crab, the Dark Hunters also gave him the ability to summon a strong gravitational field in his mouth, allowing him to eat entire buildings. He then channels all the matter, and fires it out of his two tail stingers, creating a devastating molecule storm. The microscopic impacts can destroy a slab of Great Mech (Mata Nui's first body) armor in seconds, if he doesn't decide to swallow it instead.

Missed last chapter? Then go to the Great Being Angonce.

Please, let me know what you think of the series so far. Include areas were I should improve my writing, or tell me what you would like to see in here.

Gali: But how? How in the world did Teridax… I mean, Shadow Teridax, survive?

Wondering what’s going on? Go see the Great Being Angonce to read the last chapter.

Vakama: This isn’t the only time Makuta have survived out of their physical forms. Teridax already has inhabited three different bodies, and has taken the form of shadow in many cases. It could be that when his body was once again destroyed, his essence remained.

Jaller: I remember when Takanuva had defeated Teridax, and then we found him in Mahri Nui, in control of a Maxilos robot. Then he again transferred his personality to the Great Spirit body. I don’t know much about spirits, but I guess he survived the impact with the moon.

Vakama: His whole essence is now shadow. It will be difficult to stop him. He may even be watching us now.

Takanuva: There is no way we can keep him out. But if he were here, I would know. No shadow is safe from light.

Vakama: Indeed. I have spent my time meditating by the fire in the Fire Temple, studying the shadows and the light. Wherever light could be seen, shadow is thrown away.

Mazeka: If only you spent less time exploring your inner self, and more in the physical world, you would’ve known that a long time ago.

Mazeka: No! I am impatient with your slow minds. You sit and meditate for hours, waiting for someone who could very well never come back.

Jaller: Easy, Mazeka. Though I agree that the Turaga have spent too much time in their chambers, they have provided us with guidance for generations. They aren’t warriors, but they know more about ourselves then we do.

Mazeka: Hmph. Alright, but if they want my respect, they should start paying more attention to what is happening physically as much as they do spiritually.

Tyrant: It’s going well. But what’s the point? I’ve already told you, Rahkshi are no good without their Kraata.

Unknown: That’s my problem. Now, how about the Vahki.

Tyrant: About half of them are reactivated. Half of those are collecting more Rahkshi and Vahki, while the rest are searching the town for survivors.

Unknown: Did any escape?

Tyrant: I was just on my way to inform the Vahki to send ten squads of four to begin searching.

Unknown: Thank you. You may do so.

The Tyrant went away, oblivious to the eyes staring from the shadows.

Unknown: You have a way to activate the Rahkshi, right.

Teridax: Once I have a physical form, I will be able to create Kraata from my own essence. Then, we will send the Rahkshi swarm, and get our revenge.

Unknown: Indeed. Did you discover why the Dark Hunters refused my offer?

Teridax: No, except they know that we intend to destroy them anyway. But I did spot an unusual figure, by the name of Angonce.

Unknown: A Great Being?

Teridax: Though it is true that there was a Great Being by the name of Angonce, this one seemed more like a Glatorian. I don’t think that it is the same one.

Unknown: So what’s so unusual about him?

Teridax: He is the light in the darkness.

Angonce: Teridax has been here too often. You got any more torches?

Shadowed: No. If we plan on keeping Teridax out for the entire war, we need to keep the rest of the torches.

Angonce: Have the scouts found the Unknown.

Shadowed: Again, no. But they did find footprints. They should be bringing casts of the prints soon enough.

Angonce: How many sets are there?

A team of Dark Hunters came in, ten of them carrying a huge cast. Walking ahead of them was a titanic, female Dark Hunter, about the same size as the Shadowed One.

Female Dark Hunter: And I’m afraid one of them is a bit more familiar then I like.

The Dark Hunters placed the cast down. The Shadowed One stared at the cast, then slammed his fist on the arm of the throne.

Shadowed: Tyrant. Get everyone ready. We move out tonight.

Shadowed: Tyrant is a former Dark Hunter that constantly attempted to overthrow me. I had the Dark Hunters abandon him, but he escaped.

Angonce: And now he’s ready for revenge. Another factor in the equation.

Now, the war is brewing. Unaware of their friends, the Dark Hunters, the Toa and Glatorian prepare the villages for war. Meanwhile, the Unknown, Tyrant, and Teridax begin searching for more “allies.” Already, the Tyrant prepares to go find the Shadow Skrall, a team of rebel Skrall that seek revenge for their defeat.

Do the Toa and Dark Hunters have what it takes to defeat the enemy? Or will Teridax rise and gain a physical form? Stay tuned for more, in BIONICLE: The Return.

Go to Bionicle: The Return - Branar for chapter 7.