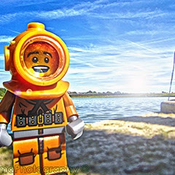 Welcome to Rock City Festival featuring 'The All Mighty BrickStars'

Being a musician and Lego enthusiast I wanted to build something that combined my favourite hobbies. This model comes complete with lots of extra areas of the festival (not just the stage) and some great finer details, which I think might lack in other festival type sets. I wanted to make sure the detail was at the right level for musicians and people who work backstage.

Main features this model include are: -