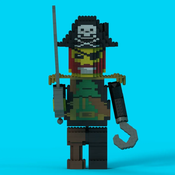 By ZapacTheGreat
73 comments
Welcome to the Woodsman's Cottage!
This is a medieval themed set which includes two minifigures. The set consists of a two-story house, which is surrounded by a training dummy, a tree, and many more hidden details!
The set consists of:
Minifigures - This set contains two minifigures, a spider, a frog, and an owl. The Woodsman has a lantern and more than one type of axe, for his lumber work, while his son has a slingshot for making mischief.
The First Floor - This area includes a table, stores of food for the winter, a fireplace, a container of coal, and a stairway that leads to the second floor. In order to access this floor, the second story is removable.
The Second Floor - This area is a sleeping place for The Woodsman and his son. It contains two beds, a lamp for each bed. In order to access this floor, both sides of the roof, and the ridge-pole are removable.
Outside - Around the house, there is a small part of the woods, with plenty of details. There is a pop-up training dummy for the Woodsman's son to practice his archery skills, and a tree.
When I started to think about a LEGO Ideas build, I knew from the start I wanted it to be something Medieval, so of course I stated out with a Castle Idea, yet there have been so many LEGO Castles, I began to think a little broader. When I started building, I had a windmill in mind, yet once I had completed the base, my vision shifted into a cottage, and that is where it stayed.
I grew up with the Castle theme, and expected it to always be a part of what LEGO was. When it was removed, I was shocked, why would they do something like that? When LEGO announced that it was going to produce the Medieval Blacksmith, I realized that if Castle was going to come back, it would be through LEGO Ideas.
This set is for anyone that is a Castle fan through and through!