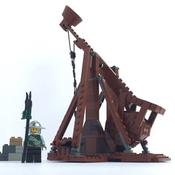 A trebuchet is similar to a catapult, but uses gravity rather than tension to hurl objects. This model actually fires; all you have to do is wind it up and let gravity do the rest of the work!

The model can fire one 2x1 brick around 19in (about 48cm) when wound up, although it can fire slightly further when pulled back with a hand due to the lack of friction.

Please support this project and help revolutionize the world of Lego catapults!