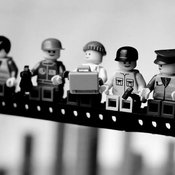 By soggysolly
29 comments
My Idea is an Octan Biofuels processing plant that produces clean fuel for the citizens of LEGO City. Octan has made many appearances in LEGO City sets since 1992. My new plant produces clean energy for the future of LEGO Minifigures.
My Limitations
During the design and building of this model, I came across a few challenges. The biggest one was the parts that I had on hand, all the parts in this model came from my existing collection. With specialized Octan parts coming from office LEGO sets. If I had every part I needed these are the things I would change.
Roof Design
As the concept of this model progressed, I knew that it needed stereotypical sloping roofs. I experimented with a few different techniques and had to settle with this one because of the lack of parts. The roof has a few gaps and doesn't seamlessly connect to the building. I would have liked to fill in the sides with windows to let more light in, but I didn't have the parts, so I had to settle with the design you can see before you.
Interior
The inside has a small mezzanine above the ground floor which allowed me to use the height of the building to my advantage. However, on the lower levels, I wasn't able to maximize the space potential. I would have added more pipes and actual functions to the model to make it real and lifelike if parts were no limitation.
Exterior
I'm pretty happy with the outcome of the outside of the building and the way I wove the Octan colors into the walls. Again, because of the lack of parts, there are a few sections that have been substituted where I have run out, i.e. the grey panels on top of the 2nd level and other places that you might pick up from the photos.
Specifications
The model is 48x16 studs (excluding roads) and the highest point on the model is 26 bricks tall. It contains an estimated 1100 Pieces.
The model comes with 6 minifigures and one vehicle (two workers, one operator, one manager, one desk assistant, and one truck driver).
Features
The model has two sloping roofs which have built-in skylights that can open for ventilation.
Both of the roofs are removable for easy access to the interior.
Inside the building, the main process happens where the mixture is mixed together, four main pipes connect and go through a series of tubes and mixing bays until they converge in one main pipe which leads through the building into the four tanks outside. The building has one main entry for vehicles up to eight studs wide. Inside they can be loaded with the mixture and sent away.
Why It Should Become A Set
Currently, LEGO releases one modular building each year which generally costs over AUD300. Young LEGO fans like myself need cheaper alternate buildings that can still be displayed in a street scene or city with the same detail and charm, just scaled down. This set would be great for young builders starting their LEGO collection, or another smaller building for more experienced builders.
I hope you like my idea. It would be great if you could support it. Thanks.