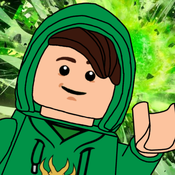 I re-submitted this project because I was really proud of it. Please support. If 10,000 people press the support button, this might be made into an actual LEGO set! If you don't want to read all this text, just look at the pics

Cyrus Borg is a character in Ninjago who was introduced back in Season 3. He owns Borg Industries and works at Borg Tower. Ever since Rebooted, Ninjago fans wanted a Borg Tower set so I decided to make a product idea of it.

This set is built to scale with minifigures. It uses 1,670 parts and has six floors. It would come with a Cyrus Borg two Nindroids, a Sons of Garmadon Biker, Nya, P.I.X.A.L, and Zane for the minifigures.

The first floor is the lobby where P.I.X.A.L greets the Ninja. There are a front desk and some screens. Next to the desk is a gold statue of Cyrus Borg that Cyrus gives to the Ninja as a gift.

The second floor is a room with Cyrus Borg's machine that finds you the perfect match. During Season 3, Nya uses the machine. She expects to see Jay, but she sees Cole's face on the machine. This made a fight between Jay and Cole.

The third floor is a room used to build the Nindroids. There is an arm on the floor used to put together a Nindroid. There is also a security camera in the room to see if the operation is going correctly as well as to make sure that no one is breaking in.

The fourth floor of the tower is the floor where the Oni Mask of Vengence was kept during Season 8. In this scene, some bikers from the Sons of Garmadon snuck in and stole the mask. The mask was behind some lasers in the show so I decided to put some red lightsaber pieces and some clips to show how the SOG took the lasers out and stole the mask.

The seventh floor is the final floor of the building. It's Cyrus Borg's office. It has a large computer with lots of screens on it. On the walls, there are some tech details.