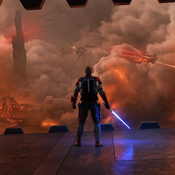 This set features the final four Jeagers (Crimson Typhoon, Cherno Alpha, Striker Eureka, and Gypsy Danger) from the 2013 film Pacific Rim. Each one of the Jeagers featers rotating hips, waist, and head. (With the exeption of Cherno Alpha) All of the Jeagers have great posability with the joints at the ankles, knees, hips, shoulders, elbows, wrists, and fingers. Crimson Typhoon features the triple arms with rotating saws that flip out from the side. Stiker Eureka feature double blades that swing out from each arm and an opening chest that exposes the missile launchers. This build is 2,773 bricks in total. Each Jeager is about 10-11 in. tall.