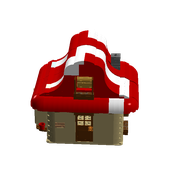 By mhousenga
11 comments
2021 marks the 60th anniversary of the first season of The Dick VanDyke Show. Still watched and admired today, the five-year comedy series has certainly influenced many similar shows that have come after it. The Dick VanDyke Show boasts many iconic sets as well, the most memorable being the Petrie's home and writers' office. This product submission is a LEGO representation of Rob, Buddy, and Sally's office, where viewers watched them produce the scripts for their show for five years. Many well-loved scenes took place in this office, and they are remembered because they were both funny and heartfelt. A piece of The Dick VanDyke Show deserves to be turned into a real LEGO display model because of the love many people still have for the series, and because of the lasting legacy the show has had since it went off the air in 1966. The model features all the iconic elements of the original set, such as the piano, typewriter and coffee table, plus four figures. Minifigures of Rob, Buddy, Sally, and Mel are included, but figures of Alan Brady and Laura could be included as well.
If you are a fan of The Dick VanDyke Show, or of classic television sitcoms in general, and want to see a LEGO set released commemorating the show, then please support this project! Goodbye for now, and hang on to your imagination and your thumbs.