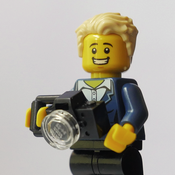 There have been many businesses in the Creator Expert Modular series over the years, but where do all the shopkeepers send their children while they work? Lion High School.

This three story corner modular is based on a modern high school and includes ten rooms and two hallways. Built on a 32x32 baseplate, Lion High is constructed from 2480 pieces, including 14 mini-figs, and fits with the other buildings from the modular line.

The ground floor of Lion High includes the office of Principle Greebles, who’s ruled the school with an iron fist for too many years. It’s rumored that he keeps confiscated items in a secret compartment in the wall behind his desk. The cafeteria seats six students, featuring an array of delicious specialties, curtesy of the lunch lady Ms. Lurp. The vending machine is fully functional with three spring loaded soft drink slots and a swing-away display compartment. The ground floor also includes a janitor’s closet, a water fountain and a working fire alarm.

The second floor includes six working lockers, a trophy cabinet with a hinged display door, a computer lab with three computers, a library with a helpful librarian, and a biology class featuring a tank where the helpless frogs are kept waiting for dissection. The frog tank has a working access panel inside the classroom but it can also be loaded (and possibly unloaded?) from a separate panel in the stairwell outside.

The music room is filled with various instruments and a rocking music teacher. There are separate bathrooms for the boys and girls, each with its own toilet, sink and a separate urinal in the boy’s room. There have been whispers that if you know where to look, you can pass notes from the boy’s bathroom to the adjacent Classroom. The third level also includes six working lockers.

Lion high has always been strict on students, but one pupil is fed up with the tyranny of Principle Greebles. Matt Rixter has come to the rescue.

After “testing” the fire alarm, he generously checks on Greeble’s office to make sure the principle is ok. When he finds the office empty, he does some dusting and discovers a tool that opens the frog tank. Feeling sympathetic to his froggy friends, Max frees the captive reptiles. But his work is not done yet. His best friend has been struggling with geometry, so Max slips him his notes through the secret passage in the boys’ bathroom. Satisfied with the rebalance of power, Max replaces the gold trophy in the trophy case with a teddy bear and grabs a free beverage to celebrate his accomplishments. Who says high school has to be a drag.