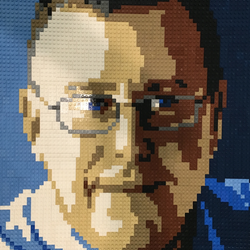 Fans of the show will know that Fawlty Towers was a BBC television sitcom broadcast in 1975 and 1979 with a total of 12 twelve episodes. As of August 2017, it is available on Netflix! The show was created and written by John Cleese and Connie Booth, who both starred in the show. The series is set in Fawlty Towers, a fictional hotel in the seaside town of Torquay on the "English Riviera" and is one of the best loved shows in British popular culture.

Here is a 2,400 piece LEGO version of the Hotel façade. Along with the staff you will find Basil the Rat and two dead pigeons in the water tank!

Enjoy the build and photos.

• One friendly Siberian Hamster, aka “Basil the Rat” from the episode by that name

• Water tank on the roof with two dead pigeons, from the “Hotel Inspector” episode

• All original LEGO pieces with no modifications