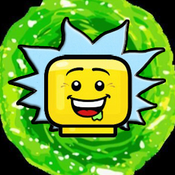 By Brick C-137
94 comments
The American space probe Pioneer 10, launched in March 2, 1972, was the first mission to the planet Jupiter. It was the first spacecraft to cross the asteroid belt. Its purpose was to collect data for the Voyager program. In 1983, the space probe crossed the orbit of the planet Neptune, the last planet in the solar system, It continues its journey towards the star Aldebaran, which it will reach in two million years.
This probe carry a plaque featuring the figures of a human female and male and several symbols that are designed to provide information about the position of the Earth. This plaque is a symbol of hope, the scientists attached this message in case the spacecraft is ever found by intelligent life-forms from another planetary system.
This creation is a tribute to the space odyssey, and 2022 will be the 50th anniversary of pioneer 10 launch.