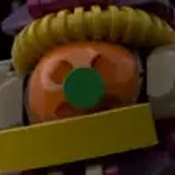 By Squwu
12 comments
Long ago in a world very different from ours, two massive entities came into being on an otherwise bare planet: the Bionis and the Mechonis. Each titan harbored life that lived along the surface of their bodies. While at one point in the distant past the civilizations co-existed, now humanity finds itself in a war against a terrible mechanical army called the Mechon that has pushed humans (otherwise known as homs) near extinction. The story opens up on Shulk, a young man connected to the conflict in an unimaginable way. After a deadly raid against his home led by a massive Mechon with a strange metal face, he makes up his mind to travel out into the unknown world and defeat the Mechon for good. Little do he and his companions know, however, that that metal-faced Mechon is never too far behind them in their travels. And it holds a secret that may change everything...
Metal Face is an iconic villain from the Square Enix game Xenoblade Chronicles and easily one of the series' most recognizable characters. While not the main antagonist of the game's plot, it plays an unforgettable role in the story and marks its presence in any scene through its consistently despicable actions. That alone is reasoning to merit making this model, but I actually have a bit of a story behind why I decided to not only make a model based on this game but also why I chose this specific character.
The best place to begin is here: Xenoblade Chronicles is one of my favorite video games. Not only do I love its story and unique gameplay, but I appreciate all the extra details that have been included to help make the world feel alive. All the settings and characters are visually stunning and create a dream-like environment. Truthfully, there are many possible options to pick from if one wants to make a model based on the game. However, out of all of them, the Mechon stand apart in a very special way. These mechanical entities are built in an alien blend of form and function, combining graceful metallic curves and bends with harsh spikes and claws. Their bodies exhibit gravity-defying designs and unnatural proportions in an almost artistic way. It goes without saying that I'm a big fan of these characters. As for why I picked Metal Face out of all the possible Mechon, there are several reasons. An obvious reason is its importance to the game's story and its recognizability. My second reason is that this character is what drew me into the game to begin with. After seeing screenshots of gameplay featuring this enemy, I was immediately interested. Yes, this may be a "judge a book by its cover" scenario, but I suppose I made a good choice in this case. After all, it leads me to my aforementioned favorite game. To me, this particular character represents the game as a whole. The choice from there is obvious.
But that's enough of praising the game. Of course, I wanted to build this for its fascinating appearance, but I knew from the beginning that it would be quite a challenge. And a challenge it was indeed. The model uses around 1,900 pieces and forced me to look into every strategy I could think of. I even needed to come up with several new ones. After all, I needed to fit many details into a relatively small space. Aside from the model's torso, the hardest part of it was actually Metal Face's namesake: the face. I went through several designs that always ended up being too big. I prefer to avoid using decals when possible, but this ended up being a case where I needed to create custom decals for the eyes as I could not achieve that granularity while staying at the right scale. The proportions of the character are rather odd, so to account for imbalance I made use of several rotating snap joints to help it maintain a pose. Ultimately, I'm happy with the outcome. The result of my work is a detailed and source-accurate model that I and any other fan of Xenoblade Chronicles would want to display. Even those unfamiliar with the series can enjoy working through some of the more unorthodox building techniques I used. My hope is that, with this, others can appreciate the wonderful artistic design of the game in a new way!