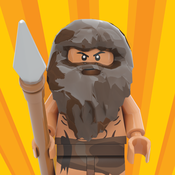 By JoshuaFrasAECS
41 comments
If there were ever a musician who deserved their own Lego set, it would be Sir Elton John. One of the greatest musicians/rockstars of all time. From headlining many of the world’s biggest stadiums, selling millions of records across every continent and along with song-writing partner Bernie Taupin, is responsible for some of history's most iconic songs, Sir Elton John really has done it all.
This set celebrates the Rocket Man with three separate scenes from his life encapsuled within a rocket, about to head into space one final time.
Starting with the bottom floor, we have a scene from before Elton was Elton. Known as Reginald Dwight back then, Sir Elton taught himself to play the piano while listening to his favourite tunes. As his parents were both musically inclined, they were fans of collecting records especially from artists Elvis Presley and Bill Haley & His Comets. Never did he know back then what it would all lead to.
On the second level, we have that historic two-night concert at Dodger Stadium. With over 100,000 people in attendance over both nights, it was like nothing the music industry had seen before. In this design, a minifigure of Sir Elton John in his iconic Dodger outfit stands next to his silver and blue piano.
On the top floor we have his farewell tour: Farewell Yellow Brick Road. With guitarist, Davey Johnstone and drummer Nigel Olsson by his side, Sir Elton John, after 50 plus years of touring brings one of the greatest musical careers of all time to a sensational close.
And finally, at the tip of the rocket, we have Sir Elton’s famous red piano with the incredible ‘Devil Suit’ created especially for the Rocketman film. This final touch is on a turntable and is therefore capable of spinning, a flamboyant touch for a flamboyant artist.
Thank you. I hope you all like it!