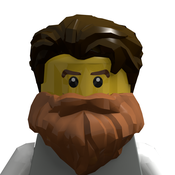 By RedBeardedDad
24 comments
A cable-stayed bridge, designed according to a futuristic idea of a bridge and mixing Technic components with recently created and classic Lego bricks.
The parts of the bridge are really supported by Lego strings with ending studs, like a real cable-stayed bridge.
The model consists of 969 parts and is approximately 52 centimeters long with a height of 20 centimeters and a width of 21.
Traveling often by car to Europe for pleasure, I have always admired since childhood a bridge that man has built over the years always maintaining a beautiful aesthetic effect, in particular the cable-stayed bridges have fascinated me. In recent years I have asked myself: why not design it with Lego bricks. Lego sets for expert builders produced in recent years have shown me construction techniques that have allowed the idea I had in mind to be real (at least on paper).
By supporting this project, we also support the creation of a new franchise of iconic constructions, existing or invented, which are beautiful to look at and to build.