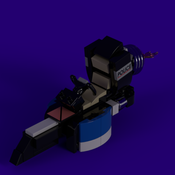 The Mega Man 1987 set is based on the original game that released December 17th,1987. I built this set because Mega Man is such a popular video game icon nowadays and I just wanted to spread the love of Mega Man worldwide. I believe this would make a great set because there are many fans around the world who enjoy Mega Man and I think this i great homage to the original game that many fans will love and appreciate.
This set contains 1,084 pieces and comes with 9 iconic simplistic brick-built figures:
Mega man, Dr.wily, Cut man, Fire man, Ice man, Guts man, Bomb man, Elec man, and The yellow demon
The only vehicle in this set is Dr.wily's Capsule: The capsule's play features include 2 spring loaded missile launchers and two stud shooters
This is all for now, I will make sure to come back with more updates along the way, and to all the LEGO fans around the world.....
"Build the world into a better place" happy building :)