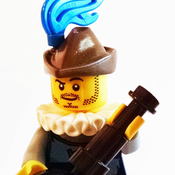 Life in the Dark Ages can be very hard... Thankfully there is the Castle Festival to keep our spirits up.

This set was inspired by the Medieval Market Village and the Kingdoms Joust sets and was designed to compliment them. The set depicts a festival taking place in a courtyard. Peasants, tradesmen, and even royalty take part in the feast. I originally created this set in Lego Digital Designer and it is less than 1600 pieces.

The Armor Shop and Blacksmith

The set includes two detachable wall segments, each featuring a separate vignette of Medieval life. I based the design of the walls on those featured in Kingdoms Joust. The scenes are based upon the classic Castle Lego sets 6041-1: Armor Shop and  6040-1: Blacksmith Shop but are built using more modern techniques.

The tower is designed to split in half, thus allowing for diversity in display. It can either be one tower or two cross-sectioned towers. Each tower is three stories tall. One tower features a second story balcony, while the other has a third-story balcony. The towers can connect to each other or the wall segments through the use of technic pins and can be rearranged into various formations.

The bakery was designed to compliment the buildings of the Medieval Market Village. The building itself is a merging of the styles of the Market Village's stables and tavern, resulting in a building with an all new profile. I experimented with different building and detailing techniques to create a structure that was unique but would still look at home displayed next to previous Castle Lego civilian buildings.

For the center stage, I chose to create a round platform adorned with colorful flags. I experimented with ways to give each musician a unique look. Their lutes were made by attaching periscope pieces to pan pieces. I wanted each musician to be colorful and eye-catching.

Beyond the three musicians, the set also includes a peasant girl and boy, a royal maiden, a jester, a baker, a blacksmith, the armor shopkeeper, and two guards for a grand total of twelve unique minifigures, each with their own quirky personality.