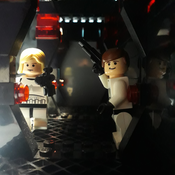 By Anthony Ducre
33 comments
My Idea is a representation of how we like to celebrate Christmas down south - in the warm sun, near the water, with the family.
Every year, Lego make awesome Christmas / Holiday-themed sets. They really do. However, they're always winter in theme. Snow and ice, cozy fires and gingerbread. However, not every Lego fan experiences a "White Christmas" the way these Christmas sets portray. I built this set to address this.
For us in the southern hemisphere, particularly in New Zealand, Australia and South Africa, Christmas is often spent at the beach, in the sun. On the beach we could be doing anything from swimming, to sunbathing, to playing some Cricket or Rugby, or swinging from the tire-swing strung up in the Pohutukawa tree.
This set hopes to capture the quintessential southern hemisphere Christmas by illustrating the scene on the beach.
This would make a great Lego set because at its heart it is a holiday set with a difference. In recognizes that while Lego fans across the world celebrate their holiday seasons in different ways, it always comes back to family. The build also makes use of parts that are not too common, (such as the Medium Dark Flesh 1x4 Tiles with Wood Grain Print and the Reddish Brown 1x1 Round Tiles with Pin Holder) so they're another way for people to get access to some great parts.
And hey, if the Christmas scene doesn't work for you, you can always remove the decorations and you've got a pretty decent Creator Beach house, eh? If that's the case, I'd consider for the set to be produced as a Creator Beach House set, minus the Christmas setting.
The images below are a mix of the actual build and a rendering. There are some slight colour changes between them, as well as how I would loosely picture the minifigs looking. The rendering doesn't show how I'd like the printing on the stairs to be, but it does show in the photos. Conversely, the rendering shows some parts that I'd like to see produced in new colours, such as Medium Dark Flesh 2x6 Plates and Dark Red 1x1 Round Quarter Circle Tiles.
I'd really like the set to include a new Cricket bat part, however, I'm aware of the rules on this. There just doesn't seem to be a part good enough for it yet, so it has been omitted, sadly.
Thanks for supporting my Lego Idea!