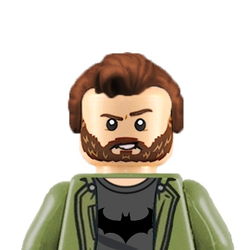 Presenting your very own dinosaur fossil, the velociraptor skull. It also features a stand and the sclerotic rings in the eyes. Few people know that velociraptors were actually much smaller than their movie counterparts. while they could get to be about two meters in length, they were less than a meter tall, coming roughly to the average persons knees. their skulls were about ten inches long, and since this is built in LDD, I'm not sure how close i am to that, but i hope its pretty close.

So, the reason i made this was actually an odd story. I'm a big dinosaur fan, and i was curious how much a real dinosaur skull cost, or even a casting of one. both were VERY expensive. Then i thought, what about 3D printing? which unless you a'ready have a 3D printer, is also fairly expensive. That's when it occured to me to build one with legos! Who doesn't want a dinosaur skull made of legos? right?

Also check out my other projects below.