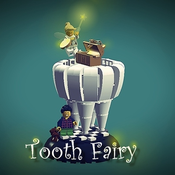 The True Story of " The Tooth Fairy "

Once upon a time there was a Fairy...this unique fairy was able to find things that the humans had lost in the nearby fresh water lake. Fishhooks, beads, coins and other things that humans had dropped into the lake would wash up on the bank right in front of the fairy’s house. She loved to pick up the trinkets and play with them. Each time she picked up a trinket, she could feel the memories associated with it...

Children are rarely ever so excited as when they’ve lost a tooth. After all, losing teeth is a big step in growing up! The fairy wanted to hold a baby tooth and know how excited the child was when he lost the tooth.

So, whenever she hears that wibbly-wobbling sound of a tooth falling off , she would fly into your room searching for her trofee.

That same night a child was sleeping soundly, snoring slightly. The fairy hovered over, peering into the  mouth of the child. Sure enough, there was a gap where the loose tooth had once been! The fairy squirmed under the pillow and found the tooth. She replaced the tooth with the silver coin. Then she flew out the window, back to her home, where she could remember the childs excitement every time she touched it.

The next morning, when the child  woke up, a coin was found and a huge toothless smile appeared on the childs face. The End