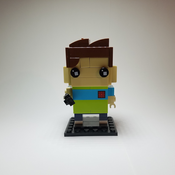 By Braydens LEGO Workshop
41 comments
The Banana Jet measures 10" (25.4 cm) long, 10" (23.5 cm) wide, and 3.5" (8.89 cm) tall. The cockpit has a HUD (heads up display) and control sticks. The exterior has partially forward swept wings, and various details including fuel lines under the wings, and sensors on the rear wings, which use the ice skate element. It has four engines, two main and two small ones (which use the coffee mug element) and a landing and take-off light. It uses upside down building techniques for part of the underside of the Banana Jet to round off the bottom. The model is very robust. The weakest part is where the rear wings are attached, which do not fall off with regular play.
The Banana Jet also comes with an airport tractor, a fuel trailer, a tug trailer, a ladder trailer, and two minifigures, a pilot and a ground crew minifigure.
The airport tractor measures 2.25" (5.72 cm) long, 1 " (2.54 cm) wide, and 2" (5.08 cm) tall. It also has clips to hold the orange beacons for directing the banana jet, and a trailer hitch for attaching the 3 included trailers.
The tug trailer connects to the airport tractor and allows the front wheel of the Banana Jet to be lifted off of the ground to be tugged to a taxiway.
The fuel trailer holds fuel which can then be pumped into the banana jet via a string element. The Banana Jet has a fuel port on the left side.
The ladder trailer allows the pilot to climb into the cockpit.
Why yellow? I originally started this model in white, grey, and black. I quickly realized that I did not have enough angled plates in white, grey, black, or a combination thereof for the wings, but I did have enough yellow angled plates.
If I had to guess, I would say that there are 850 - 1000 pieces in this model.