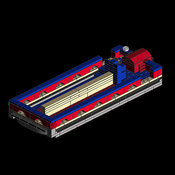 LEGO Ideas is a site where people submit ideas for new LEGO sets. If the project gets 10,000 supporters it goes to LEGO for review. If LEGO approves the project at review, they'll create an official set based on this project!

Homeworld is a real-time strategy game originally released in 1999 by Relic Entertainment. It's a one of a kind game that utilizes a fully 3D space environment for you to command your ships in. With moving music, a unique art style, and a storyline that draws you in, Homeworld has left quite an impression on players over the years. It was followed by Homeworld: Cataclysm and Homeworld 2.

On February 25, 2015, 16 years after it's initial release, Gearbox studios is bringing back Homeworld. With all new ship models, textures, and a massive engine overhaul 2 years in the making, it's truly a labor of love.

This project is for a Hiigaran Scout Ship model. This is among the smallest ships in Homeworld 2. It's a fast, maneuverable ship that players use to explore the surrounding space.

Our ship is slightly under-scaled from the in-game version to allow a more economical price point. As shown in the model, a cockpit interior is possible at this scale and can fit 1-2 minifigs, improving the playability of the set.

Finally, the main project photo depicts a re-colored version of the model which more closely matches the ship's in-game default color scheme. We believe that this may be more eye-catching to the general public than the iconic "Dust Wars" inspired red color scheme. Homeworld's ships are renowned for being brightly colored, which makes them excellently suited to this medium. Additionally, it provides another opportunity to enhance the desirability of the set, by using one of three usually rare colors - either medium azure, dark azure, or sand blue - for the primary color. The stripe can be regular orange.

An interesting bit of trivia - the font Homeworld uses is the same font used on the bricks from the Classic Space "LL-" series ships.

Please support our project and make an official Homeworld set a reality!

This is a collaborative project with https://ideas.lego.com/profile/dabrick