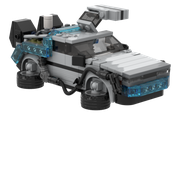 Nasty bureaucrat Walter Peck is mad that a paranormal entity escaped from the Ghostbuster's top floor examination tank and is loose in New York City. Help Egon chase the ghost on the Ecto-½, before the New York City Policeman gets attacked. Egon can use the included Proton Pack and Ghost Trap to zap the entity, then take it back to the Firehouse and place it in the Containment Unit. Hurry, before Peck shuts the Ghostbusters down for good!

THE FIREHOUSE:
Despite it's small size this Firehouse is packed with details. The first floor features the iconic Containment Unit. The second floor houses a living area for a Ghostbuster, with sink and sleeping quarters. The third floor houses Egon's lab, with various equipment including a computer, a reel-to-reel, and particle charged glass holding cell (inspired by the unit that holds Slimer in the IDW comic).

There's a ladder for climbing up floors - and of course a fire pole for sliding down in emergencies. There's even a wall mounted alarm based on the one Janine sets off in the opening of The Real Ghostbusters cartoon.

THE ECTO-½:
This small vehicle is perfect for one Ghostbuster to tend to smaller jobs while his three coworkers take the Ecto-1 on larger missions. The sidecar contains most of the sensory equipment present in the Ecto-1 and has storage for a Proton Pack and a Ghost Trap.

Unfortunately the weight of all this equipment leaves the cycle unable to support an extra passenger in the sidecar. But it means the Ghostbusters can work more than one job at a time, and Venkman's all about the billing.

Now, this is definitely not the first Ghostbusters Firehouse to be submitted on LEGO Ideas.

But I took a different approach and tried to do what The LEGO Group might do if Ghostbusters were one of their major lines - create a set at a manageable size with multiple elements and figures that tell a story or a part of a story.

Even though the Firehouse is not Ecto-1 compatible, this set still works to supplement the existing LEGO Ideas set by providing classic antagonist Walter Peck, a ghost for the existing Ghostbusters to hunt, and a new Ghost Trap that's more accurate to the original prop.

With all this in mind, I think this set could be a perfect way to expand LEGO's Ghostbusters offerings. I hope you'll agree and support Ghostbusters Firehouse Fiasco.