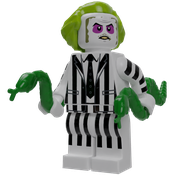 By OldestFlyingApple
39 comments
I present Lego Beetlejuice based on the hit movie of the same name Beetlejuice released in 1988 is a classic devised by Tim Burton. This set features the Maitland household of which can be upgrade to look like the Deetz household.
The house is two floors tall along with a small attic.
The house features:
The hallway where the movies final scene takes place with the dancing rocking chair , the chirping cuckoo clock ,the table adorned with the jumping tubs and numerous other furnishings.
The living room equipped with a large sofa for two ,a small bar and the large fire place of which rotates to reveal a character of your choosing allowing a re-enactment of the summoning of Beetlejuice.
Charles' office fitted with a bookshelf with a model bird as well as a place for Charles to bird watch from.
Lydia's bedroom adorned with a small set of draws ,a bed ,large lamp and a creepy toy doll
The attic filled with Adam's large model village with the Maitland house and some small trees as well as a mini toy car for the miniature figurine. The attic is also equipped with light fittings on the ceiling as well as a paint bucket for Adam.
The set also feature 8 Minifigure as well as a brick built sandworm:
Adam Maitland
Beetlejuice
Beetlejuice(trench coat)
Barbara Maitland
Charles Deetz
Delia Deetz
Otho
Lydia Deetz
Brick built sandworm
I hope you enjoy this set , please support to help this set become a reality