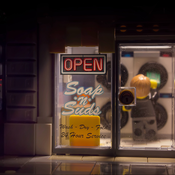 This is a design which I have created in LDD (Lego® Digital Designer http://ldd.lego.com/en-au/ created by Lego®).

I created this design for a Lego® Competition but I thought it was nice enough to go well for a set.

I think this design would be an awesome one to go in a forest-y area. If you don't want to build it then you could still use the trees and the other greenery for a forest.

The design would be good to go in the Lego® Creator because everything is simple just like this design.

I built this Lego® set not just for the competition but because it is something that would look nice as a set. The design itself is based on the South Australian Botanic Gardens. I have made some variations because I couldn't really build them, but this is what I accomplished in the set design.

I believe this would make a wonderful set because of the greenery it has and the amount of nature there is as well. Some Lego® sets just need some green in them so I made one full of green to show nature.

The original gate looks just like this URL which I have included, of the real front of the Garden -https://www.anbg.gov.au/chabg/bg-dir/large-pics/adelaide-b_3.jpg